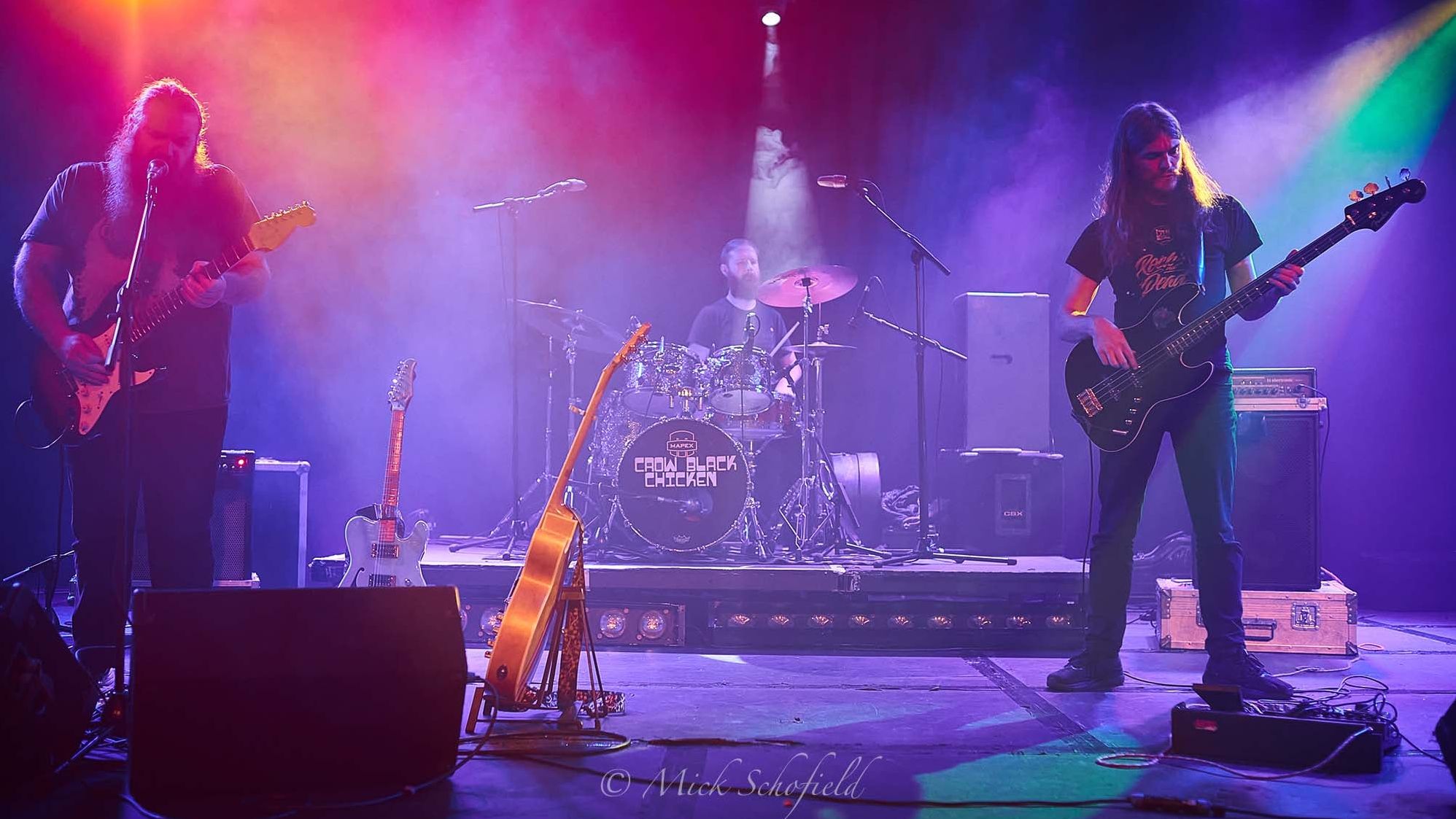 The band was formed in 2009 in Cork city when lead singer Christy O’Hanlon met the former rhythm section of Clonmel Punk Rock outfit Aural Ammunition, Stephen McGrath (Bass) and Gev Barrett (Drums). The band immediately jelled and went on to perform on the BBC Introducing stage at Glastonbury 2011.

The band released their first raw blues rock and roll album in 2012 which was produced by Producer Philip Magee (Kodaline, Aslan, The Blizzards). The bands second album Rumble Shake was released in 2014 and debuted at number 12 in the Irish album charts. Recorded in Westland Studios Dublin, this album was a more roots and blues affair than the first record, heavily influenced by the bands work with Texan Americana singer Ray Wylie Hubbard and legendary Austin Producer the late George Reiff. In 2015 the band went on to release their first live album entitled Deep South which was voted top 5 live albums of 2015 by Classic Rock Blues.

In 2016 Crow Black Chicken opened for ZZ Top at the Marquee in Cork which brought them face to face with the Texan compatriots whom they often drew so many comparisons to. Always determined to create a sound all of their own the band continues to tour all over Europe and have since released a 4th studio album Pariah Brothers in 2017.

Winners of the Introducing stage at Skegness Rock and Blues (UK) 2019 and Minehead Giants of Rock (UK) in 2020 and set to headline HRH Blues in the O2 Sheffield in 2021 the band continues their extensive touring of the UK. After the release of their latest Live Record South Roman Street the Crow Black Chickens 5th studio album is already in the pipeline.

»These guys do the nasty blues like the devil hisself was hurting and rock like they’ll skate come judgement day«
Ray Wylie Hubbard
»CBC could save rock and roll«
Alvin Youngblood Hart
»With their debut album Electric Soup the band shows steely intention to throw away comparisons and make their own mark.«
Classic Rock Blues Magazine
»Loving the album, Rumble Shake is stunning«.
Classic Rock Blues Magazine
»It is not often these days for a band to lay down a complete track as a track but that’s exactly the approach taken by Crow Black Chicken. This is a very honest album with a lot of feel and solid playing throughout and is a strong promise of things to come.«
Guitar Techniques.
»Electric Soup is not only a promising debut, it’s a savage beast of a record: grimy, lean, mean, and soulful.«
Allmusic.com